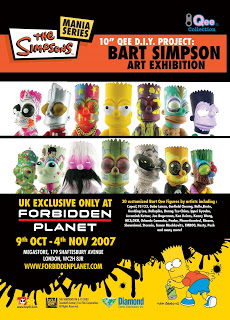 The 10" QEE D.I.Y. Project: Bart Simpson Art Exhibition takes on the UK this month. Toy2R and Diamond Comics are proud to announce that Forbidden Planet will host an exhibit of more than 50 customized Bart Simpson Qees.

Forbidden Planet is proud to announce that we are the ONLY UK stop on the worldwide tour of the Toy2R and Diamond Comics’ 10” Qee D.I.Y Project: Bart Simpson Art Exhibition. From 10th October to 4th November 2007 you can see the exhibition on display in our stores front windows. The tour marks the launch of the licensed line of Qee figures based on The Simpsons characters.

Some of the most influential pop culture artists, designers and illustrators from around the world were giving a blank 10” Qee of Bart Simpson to customize however they liked. They painted, sculptured and re-imagined the blank Barts to make a totally original creation based on their own style. It seemed like a natural thing to mix one of the most iconic characters of modern times with the most cutting edge creatives around today, most of who grew up watching The Simpsons.

The Qee figures are a part of the Vinyl Toys culture that started in Japan and has become a phenomenon throughout the world. Qee’s were created by ToyR2 and can be as small as 2” tall or a massive 2 feet high. Urban Vinyl is now being recognized as an art form worth investing in as the figures are mostly limited editions and highly collectable.

The Bart Simpson Qee tour has already been to LA, New York, Paris, Florence and Rome. Forbidden Planet is the only place in the UK you can see this exhibition. The tour will finish in Hong Kong at the end of the year and the majority of the customized figures will be auctioned off and all proceeds will go to charity.

Forbidden Planet will also be selling blank Bart Qees so people can do their own one off designs!