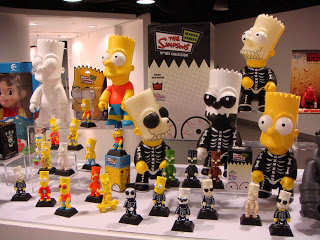 Toy2R wrapped up their stay at the Dimension 07 Exhibit held in Hong Kong. Not only did Toy2R display several items from its vast collection of Qees but there were brilliant displays of more than 250 pieces of artwork from students and professional designers.

Standing tall was the SIMPSONS QEE line from TOY2R. The first wave of figures has focused on BART SIMPSON and wow what a release. From the Classic Outift 3" and 10" Qees to the recently released MANIA SERIES ASSORTMENT to the upcoming HALLOWEEN FIgures. This is vinyl at its best featuring one of the best licensed characters and an entertainment icon. Look forward to seeing more BARTS coming in MANIA SERIES 2 and some limited edition releases of some of the customized 10" Qees fromt he BART SIMPSON WORLDWIDE TOUR!! After that, Homer is ready for his debut.....mmm donuts!!